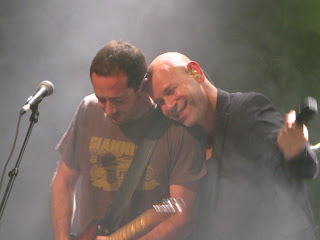 Rami Kleinstein was born in 1962 in New York. He came to Israel with his family at the age of 8. Now considered one of Israel's big name musicians, he has often played venues holding thousands of fans. Last night he performed at the Zappa club in Jerusalem, one of a group of four intimate clubs across Israel which combine high level musical entertainment with wide ranging menus.

The Zappa club is set up as a restaurant and live concert venue. When you order tickets, you are provided with reserved spots at one of the tables, which are each set up to hold 6 to 8 guests. Apparently you can join Zappa for an annual fee and get prime reserved seating in advance for event tickets at Zappa's clubs across Israel.

Looking around, it was evident that all of the seats had great sight lines. We were sitting close enough that Kleinstein made it over to one or two tables ahead of us while belting out one of the encore numbers. The club played a mixture of Springsteen and Police music before the show. I'm not sure if this was selected by the band or picked by Zappa to suit the audience but either way, it seemed to fit quite nicely.

The food was excellent. Zappa Jerusalem is a kosher, meat restaurant. The selection included items like chili-honey grilled chicken thighs, assorted Jerusalem grill (a variety of mixed meats), Asian chicken salad and a variety of appetizers and desserts. There were some vegetarian dishes and soy-milk based cappuccinos and other specialty coffees. The wine selection was also quite decent.

But the main course this evening was undoubtedly Rami Kleinstein. Wearing faded red pants, a dark t-shirt and a dinner jacket, Rami joined his six piece back up group (the "council") by sitting down at his red piano and beginning his set.

Rami enthusiastically welcomed the capacity crowd, commenting a number of times on how special it was to be playing in Jerusalem. He mentioned that he would be playing a broad selection of music from his 25 year career and delved into it.

Sometimes compared musically to an Israeli Billy Joel or Elton John, Rami's smooth piano playing evokes these comparisons. But I would say that a good chunk of his music also veers a bit closer to rock artists such as Bruce Springsteen or Bob Seger, though Kleinstein has a much smoother voice. The oft made comparison was highlighted about half way through the show when Kleinstein delivered a beautiful rendition of Billy Joel's Piano Man.

Supported by three guitarists, a bassist, a back up singer and a drummer, Kleinstein covered a variety of music styles, even flirting with some reggae at one point. He filled the club with warmth and emotion when he sat at the piano singing ballads - some with and some without the rest of the band. His ongoing rapport with the crowd was just the right balance, introducing new and old songs with a blend of humour and excitement. The band played two songs that Kleinstein described as "so new they were still in diapers and had yet to be named..."

Rami was married for many years to Rita, another well known Israeli singer. Prior to their divorce, he was actively involved in her musical career and wrote many songs to her, about her and inspired by her. There was a particular edge to many of these songs, which Kleinstein mischievously described as having been written to "one specific person." Many of these pieces are among Kleinstein's best works.

Towards the second half of the show, which was slightly more than two hours, Kleinstein took off his jacket and led the band through a number of more up-tempo, well-known numbers. He made his way around the tables, imploring the crowd to get off their feet and dance. The audience enthusiastically obliged and sang along until the end of the show.

Throughout the concert, Kleinstein was emotional and completely immersed in the music, usually with a wide grin. The band was tight and well rehearsed. Kleinstein's voice was smooth and accessible and his piano playing was passionate and quite enjoyable.

The overall combination of an intimate venue with great food, terrific acoustics (the volume was just right) and Rami Kleinstein - an oustanding performer, made this one of the great concert evenings I've had the pleasure of attending.
Posted by Ranana Reveller at 6:12 AM